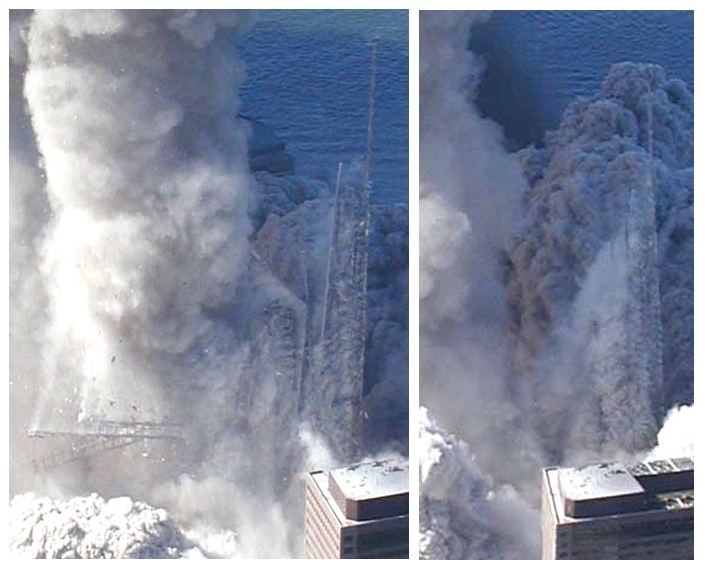 2001
Lt. Gen. John Costello, the USASMDC commander, observes that “directed energy technology has the potential to be a key component in the
Army transformation effort.”


Jan. 25, 2001
Spacedaily reports about a successful "integrated ground test of the Alpha high-energy laser, its beam director telescope
and the associated beam alignment and correction system" which have provided the team developing the Space-Based Laser Integrated Flight Experiment (SBL-IFX) .
Team SBL-IFX, is a joint-venture comprising TRW, Lockheed Martin and Boeing

"...EADS Astrium Satellites [sic: is picked] as prime contractor for the space segment...Spot Image is the official and exclusive worldwide distributor of PLEIADES products..." [see also https://ff.im/anZUb October 23 "11/18 - 11/20 Taormina (Sicily): 15th GeoCAP Conference is using "Agriculture" as Cover for Space GIS Defense" "...SpotImage, is a competitor of GeoEye Inc, and yet another subsidiary of EADS Astrium (81%)..."]

March 4th, 2001
FOX TV airs the Pilot of "Lone Gunmen" by X-Files producer Chris Carter.
The so called "12D plan is for a small group of government operatives to crash a jetliner into the World Trade Center" with intelligent software. In the last minute the lone gunmen can avoid the catastrophe on board. The episode is repeated in august 2001.
Chris Carter is later shocked about the "coincidence" of the story


June 18-20, 2001
At the "MPEG-4-Exhibition 2001" in San Jose, California; Optibase demonstrates real-time encoding and streaming for content creation with the animation tool Viz [modeling] streaming from Israeli compnay vizRT, which also has an office in Los Angeles, partnering with Reality Check Studios aka realityx. Optibase shows that their product allows "on-air graphics simultaneously with their MPEG-4 streams" for "interactive TV" https://www.m4if.org/wemp2001/abstracts.php
https://friendfeed.com/e/38b8131f-5c50-48f6-819a-f6ffb875c936/The-AceBaker-VIZRT-link/


2001
Lt. Gen. John Costello, the USASMDC commander, observes that “directed energy technology has the potential to be a key component in the
Army transformation effort.”


June 2001
German intelligence, the BND, warns the CIA and Israel that Middle Eastern terrorists are 'planning to hijack commercial aircraft to use as weapons to attack important symbols of American and Israeli culture.'
[Source: Frankfurter Allgemeine Zeitung, September 14, 2001.

June 2001
Dr. Christos Tsonas, Holy Cross, 4701 North Federal Highway in Ft. Lauderdale, Florida
had to confirm to the FBI, that he probably examined in this months someone of the 911-"hijackers", Ahmed Alhaznawi.
Tsonas is member of the American Board of Emergency Medicine.


Summer 2001
Nanoenergetics Inc./NovaCentrix starts working on Nanothermite Weaponry aka 'super thermite', under a $250,000 Defense Advanced Research Projects Agency (DARPA) contract to develop wall-breaching rounds that can be fired from weapons like a rocket launcher.

July 15th , 2001
Henry Kissinger talks about his new book on C-Span,
"Does America Need a Foreign Policy?:Toward a New Diplomacy for the 21st Century".
The book outlines what America's future foreign policy should be and evaluates the United States' role in the Balkans, Europe, China and the Middle East.
Kissinger suggests that in the future NATO ``will no longer prove adequate as the sole institutional framework for Atlantic cooperation.'

August 2nd, 2001
Christina Rocca, the director of Asian affairs at the State Department, met the Taliban ambassador in Islamabad. Ms Rocca was previously in charge of contacts with Islamist guerrilla groups at the CIA, where in the 1980s, she oversaw the delivery of Stinger missiles to Afghan mujaheddin.

Telus has an estimated 7000 employees in the Phillipines where it is known as Telus International, Inc.

Mid-August 2001
Mohammad Atta, on a watch list by dozens of european intelligence- and police agencies, is caught by U.S. police without his drivers license in Broward County, Florida. He doesn't appear on court and was put on a wanted list.


August 16th, 2001
Habib Zacarias Moussaoui, the so called "20th hijacker" is arrested in Minnesota.
Police wondered, why this pilot only wished to fly horizontal flights instead of landing and starting. French Secret Service warns the CIA, he could be connected to a hijacker attack.
The FBI and the main US media ignores this story until December 2001.
Moussaoui shared an appartment with Mohammad Atta together in the same house in Hamburg, Marienstrasse 54.
Atta once lived in Hamburg- Uhlenhorst, near the home of a man called Mamoun Darkazanli, a businessman of Syrian origin, who has been under police surveillance and on the watch list of BND and CIA, who tried to recruit Darkazanli.

Week of August 20th
"...three weeks before the attack of September 11 security at the World Trade Center was abruptly heightened..."
Source: counterpunch.com
This was also confirmed by financial analyst Ben Fountain
"...over the past few weeks we'd been evacuated a number of times, which is unusual..."
https://people.aol.com/people/special/0,11859,174592-5,00.html

September 2001
nationaldefensemagazine describes "laser weapons for ground combat—ranging from air-defense chemical lasers that destroy incoming rockets to smaller devices that could zap enemy antennas".
"...The Air Force is developing a megawatt airborne laser that would destroy intercontinental ballistic missiles...
...For the future combat system, the Army’s next-generation tank, the goal is to have a 100-kilowatt, un-cooled, solid-state laser...
...In the commercial sector, TRW Inc. has built 4-5 kilowatt solid-state lasers, for industrial machining applications.
The company is a prime contractor for military chemical-laser programs, including THEL, the airborne laser and the space-based laser projects..."


September 10th, 2001
The SAMS (The Army's School of Advanced Military Studies) officers
say: 'Wildcard. Ruthless and cunning. Has capability to target US forces and make it look like a Palestinian/Arab act.'"
("US troops  would enforce peace under Army study,"
Washington Times, Sept.. 10, 2001, pg. A1, 9.)
Just 24 hours after this story appeared, the Pentagon was hit and the Arabs were being blamed..."
https://www.google.com/search?q=Wildcard.+Ruthless+and+cunning++SAMS+washington+post&btnG=Google+Search


9/11
Both Twin Towers disintegrate for unexplained reasons, wiping out also complete DNAs.
Early speculations on the internet point on "Tesla Weapons obtained by unknown terrorists".
This spin is later replaced by a much more popular, so called conventional 'controlled demolition' thesis.

"..I heard earlier today they knew this was coming ... I have a brother who lives and works close to the Wright/Patterson Air Force base in Dayton...The company he works for said the officials at W/P advised them to send home all employees... stating W/P was to be target number 6 and they have known this since last night.."

September 11, 2001
On the morning of 9/11, the NRO, who gave out contracts on Future Combat System, is officially putting a terror exercise on hold.
Spokesman Art Haubold tells UPI, “It was just a coincidence. It wasn't an anti-terrorism exercise. It was an emergency response exercise. It was just a strange coincidence”.
The NRO’s internal war-gaming division planned the drill. NGA public affairs

OMW (Office of Future Warfare Systems)
is NGA’s main point of contact for the Missile Defense Agency (MDA) which works with Directed Energy Weapons since at least 1997. [5]


2001
9/11 is described by many 9/11 Researchers and -analysts as an absurde reality switching experiment, manipulating people worldwide into an asymmetrical logic thinking or a Logic-Reality Paradox.
Ironically supporters of the official story seem to support a similar view about the 9/11 Truth Movement, which started on the Internet only, often also describe them as "dangerous".


October 2001
ewing2001 aka Testpod69 aka ? starts an own chat room on the IRC with friends of Josh Harris' Big Brother art project https://weliveinpublic.com, where he updated on the Anthrax Attacks or first rumours and beginning of the War against the Taliban. In the same month, GROUND ZERO Forum contacted almost 80-100 other Sep11th-related website projects


November 2001
Ewing2001 starts to promote his investigative results in an own newsletter and mirrored the highlights on https://guerrillanews.com. In the same month, the "ultimate timeline" was released, a document, which was 20 pages long and started in the 60s

December 2001
media scientist, comedian, journalist and electronic defense researcher ewing2001 decides to reach out to 'some political level'. He signs in at democraticunderground.com (DU) and promotes his investigative results in the "911-section", where he cooperates with talents like Ajw18, Horne,John and 2muchBS